Whether someone is a tobacco industry brand owner, manufacturer, researcher, media professional, or someone who is concerned about the impact of tobacco and nicotine products on public health or the natural environment, the Global Tobacco and Nicotine Forum (GTNF) in September is a must-attend event. GTNF, the world's largest and longest-standing annual summit in tobacco industry, and also billed as "quite simply the greatest interactive tobacco industry idea exchange on earth" by Tobacco Report magazine, has contributed to discuss and explore the transformation and development of the tobacco and nicotine industries since its inception in 2008. It provides a conducive arena for academic sharing, idea collision, and regulatory policy making related to the industry, attracting thousands of experts and scholars, companies, investors, and media reporters from around the world every year to join in.

This year the three-day GTNF 2022 event will be held in Washington, D.C., starting September 27. Besides many familiar tobacco companies such as BAT, Juul, PMI participating as promised, there are some new faces this year, such as ICCPP Group, the parent company of VOOPOO. GTNF's LinkedIn has newly followed ICCPP Group, the global operation electronic atomization company from China with a full industrial chain layout including electronic chips, atomization equipment, atomizing cores, atomizers, etc. Its products and services cover more than 70 countries worldwide and have more than 36 million global users.

Although the name ICCPP may be unfamiliar to many people, when it comes to the well-known brand and business, VOOPOO, many people may show a heartfelt smile. VOOPOO, the top brand of ICCPP Group, is the No.1 brand in the vape field of open system. Starting from the release of the 1st  DRAG second suction product in 2017, setting a world record with 0.025 seconds ignition speed, and in 2019 with the VINCI series to break the traditional perception boundaries between MOD and POD, creating an new compatible era between them, ICCPP continues to lead the pioneering field of open system, creating one industry miracle after another.

Branded ODM+, a new strategic business launched by ICCPP this year, has quickly solved customers'pain points, achieved their trust and entered the first echelon of the e-cigarette Original Design Manufacturer(ODM) industry in less than half a year.  With its keen insight of branded product strategy, global leading science and technology, intelligent manufacturing and digital platform services, ICCPP ODM+ has 30 global partners worldwide, covering more than 20 countries and regions in 5 continents.

"INNOVATING FOR TOMORROW", the theme of GTNF2022, seems to coincide with the concept of "INNOVATION SHIFTS FUTURE" that ICCPP has been promoting. ICCPP believes that the origin of all technological innovation is users, and that innovation should come from users and be used by them, so that their purpose of science and technology is to make users' lives healthier and happier. Then they adhere to the long-term route of scientific and technological innovation without waving and hesitation and more than 10% of the annual R & D strategic investment since its establishment. From talent layout, laboratory construction, the industry's first digital strategy investment and other aspects, ICCPP contentiously strengthens their basic capabilities, improves the level of scientific research and technology and creates numerous industrial achievements. Besides, ICCPP published an SCI paper in the Journal of Advanced Research in Fluid Mechanics and Thermal Sciences not long ago , which is the 1st SCI paper to study the structure of electronic atomizers in the industry as well.

Everest Zhao, CEO and founder of ICCPP, said, "Instead of competing for speed in 500 steps and endurance for 3,000 steps, we uphold marathon spirit to do strategic reserve and technology investment in order to usher in the explosive and sprinting development of business. " The innovation and success of ICCPP's ODM+ business also comes from this. 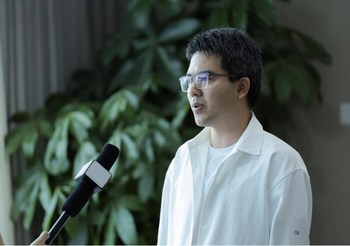 ICCPP GROUP :Always Caring About The World We Live In

It's clear that ICCPP did not join GTNF2022 on a whim. These days their facebook and twitter share what they have done over the year, which is also inseparable from the themes of industry change and sustainability that GTNF has been focusing on. If ICCPP's technological innovation comes from the root of their accumulation of change, their insight and facts in guiding the switch of smokers to vapers and focusing on women and the environment also show that they are always exploring new boundaries in new areas, always caring for the world we live in, and proving their philosophy with responsibility and value.

In October 2021, from Manchester, London, Birmingham, Bradford, Coventry, Leicester, Preston to Leeds, ICCPP launched a caravan tour across the UK to actively encourage smokers to participate in the 28-day quit smoking challenge, so that more smokers can learn more about new tobacco products and understand how to choose the right vape products for themselves, and even encourage them to face the pressure and difficulties of quitting smoking.

Meanwhile, October is known as Breast Cancer Awareness Month, and in the U.S., ICCPP's brand VOOPOO has partnered with its distributor Vapor Beast and online distributor Direct Vapor, Vaporfi and Vapor Shark for philanthropy, donating $1 to public charities for every VOOPOO Pack sold, and each customer will also receive a pink silicone bracelet to remind them of breast cancer prevention and protection. From October 1st to 31st, in just one month they donated over $15,000 and gave over 50,000 pink bracelets. In addition, ICCPP have launched the world's largest creative campaign in the UK and Indonesia, attracting world's attention to vaper and smoking. The launch of spark your life, ICCPP's co-branded theme song, as well, caused the circle-breaking spread of various social media platforms including TikTok. 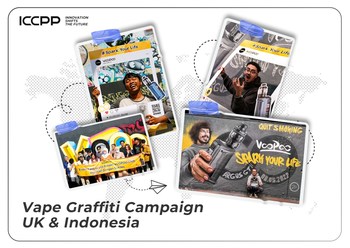 This is the power of the group, and the power that GTNF expects. It is hard to make a spring out of a single tree. GTNF2022, a global event for the exchange of opinions between public health experts, government representatives, industry and investors, is about to begin, and we expect to hear more voices from the industry at this forum. We finally and sincerely hope that many companies including ICCPP GROUP will actively engage in dialogues and communications with experts, scholars and government representatives to create more value and power for the future of the tobacco and nicotine industries.